Version 1.0.4.1 has been released.
Few new features, a lot of bug fixes. Anyway, a lot is going on behind the scene, therefore stay tuned for the next release and for tutorials about how to use my model in your plug-ins, for free! 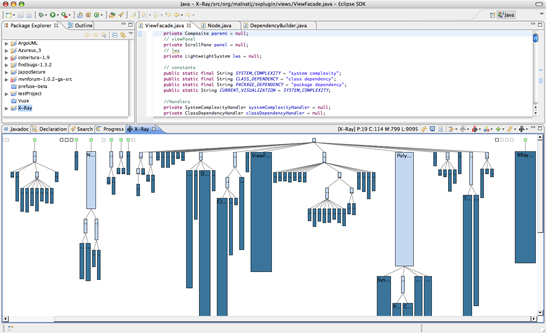 This is a screenshot of X-Ray visualizing itself through a System Complexity View.

Give it a try, it's free! and write me about requests or bugs.

Citylyzer is a 3D visualization plug-in for Eclipse.
Like Proximity Alert, it exploits X-Ray's model creation in order to visualize the underlying code. (soon there will be a tutorial about using and extending my model)

(from its official website) Citylyzer is a 3D visualization tool that uses a city metaphor (like the well known CodeCity) to represent the code: classes are buildings and packages are districts. Try it! 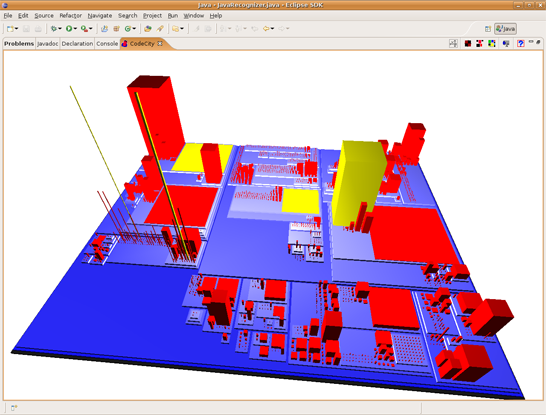 Andrea Casarella has been the first plug-in developer to integrate and exploit X-Ray's model (soon there will be a tutorial about using and extending my model).

(from its official website) "The goal of Proximity Alert is to create an open-source plug-in for Eclipse that allows programmer to see and to be warned if code modification could compromise the system functioning. The scope of the system is to simplify by using a graphical support the work of the developers that will be totally guided through the system, its entities and warned if modifications in one of them could affect the correct functioning of it." Try it! 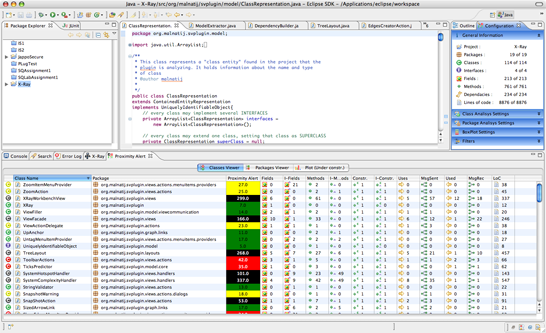 This is a screenshot of Proximity Alert analyzing X-Ray, exploiting X-Ray's model.

The new version (1.0.4) of the plug-in has been released.
I'm been tuning up the model (faster and with less memory footprint), corrected some bugs, improved a bit the usability and made the model accessible to any other plug-in (yes, you can use my model for your own contributions!)

Get it! and write me about requests or bugs.